Kabul was once the home of the maddest owner in all of the lands, and who wouldn't be mad trying to operate a baseball team in war-torn Kabul? But alas! Wolfman has gone missing!

This year will the second FIND A FRIEND Winter Meetings, so grab a friend GM and build upon the success we had finding @Reel during the 122nd Winter Meetings in nearby BATON ROUGE LOUSIANASTAN. This time, we'll be using emerging satellite technology that detects large anger vortexes and attempts to triangulate the signal of hate -- hopefully, that will lead us to wolfman!

What's there to do in Kabul besides die? Grab a friend GM and visit the Kabul Bird Market. Maybe it will remind you of this game we play. Haggle, trade, and watch birds fight - do birds have rights?! 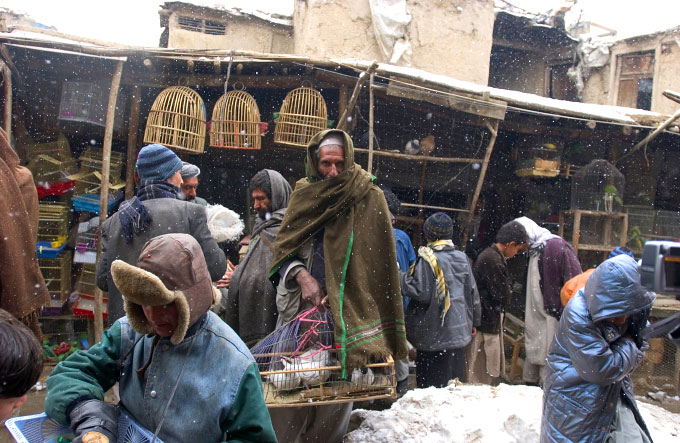 Be sure to visit the Kabul Zoo, a popular local spot. The main attraction is Khanzir, the only pig in the entire country. The Zoo was best known for its famous lion, Marjan, which died in 2002. Marjan was given to Kabul by West Germany in 1976. The lion witnessed Afghanistan's turbulent history, from the communist coup, the Soviet occupation, the state of warlordism, and the hardline Taliban regime. Unfortunately, Majan did not live to see the Kabul renaissance of the 2030s and the successfully defended Alien Spider Invasion.

Marjan was a complete badass, even for a lion. He survived civil war shelling of the zoo, killed an idiot soldier that snuck into his lion's den, and survived a grenade attack from a brother of the soldier that was seeking revenge. The grenade thrower was later killed by an angry mob.

A joint collaboration between the Winter Committee Meeting and the WBL Commissioner's Office, the Worldtopia Baseball League and their affiliated parties will gather at the 128th annual meetings for a week filled with seminars and league and organizational meetings.

For six event-packed days, the host hotel will bring together front office personnel, trade show exhibitors and job seekers, all under one roof. Throughout the week, a number of notable events fill the agenda, including the Baseball Trade Show; the WBL Job Fair, presented by the ULG; the Banquet; the Bob Freitas Business Seminar & Workshop Series; the Awards Luncheon; and the Gala.

This year, the Workshop Series will feature several interesting breakout sessions such as:

Canada Finds New Allies: Banned from baseball and on the run from the law for running a Personality Enhancing Drug ring out of his Submarine, Wooly finds new friendships among anti-American bastards that don't care about the integrity of the Internet's Pastime.

Get to Know CPU: Need a friend GM? New OTTO BOTS are flooding open GM positions around the league. Pull up a chair for some speed dating, OTTO style!

And a live screening of a new film:
ESPSim Presents: Four Days in October
In late October 2075, with both series at 3-0, four WBL teams had a date with the time-space continuum. The four teams faced game four after game four. This science fiction film directed by JJ Abrams Jr. will have you on the edge of your seat, wanting more game fours!

#2
At work, @bruin @bruin228 please respond with the appropriate hills gif for me

Community Liaison
#3
I'm so happy I get to play this season. I think I had a legit chance to make the playoffs last year if I was allowed to export! The team honestly did amazing, going 76-86, considering they spent much of the season with only 2 outfielders, forcing the backup catcher to play CF in homage to @Reel's greatest managerial moves.

#5
Did I miss the shamship?

Utopia Moderator
#6
Will this be the WBL’s farewell season?

#8
Orlando said:
Will this be the WBL’s farewell season?
Click to expand...

#9
Orlando said:
Will this be the WBL’s farewell season?
Click to expand...

#11
@Orlando you sly qual you, teasing the new SPACETOPIA league in such an alarming manner.

#12
I still have dibs on the Triton Tridents

Community Liaison
#13
Thought for sure this off season would be some hamfisted joint TRI-CENTENNIAL celebration with Buffalo taking the lead and having some smaller meetings in the other former US cities. In the end I think it is fitting that the country who destroyed the US and fought off space spiders gets the nod.

#14
Should I start spamming threads like @Reel and asking people if they have 5 minutes a day?

#15
Travis7401 said:
Thought for sure this off season would be some hamfisted joint TRI-CENTENNIAL celebration with Buffalo taking the lead and having some smaller meetings in the other former US cities. In the end I think it is fitting that the country who destroyed the US and fought off space spiders gets the nod.
Click to expand...
Buffalo is is sovereign city state by 2075

#16
doh said:
Should I start spamming threads like @Reel and asking people if they have 5 minutes a day?
Click to expand...
Yes, always.

#17
doh said:
Should I start spamming threads like @Reel and asking people if they have 5 minutes a day?
Click to expand...

Community Liaison
#18
doh said:
Should I start spamming threads like @Reel and asking people if they have 5 minutes a day?
Click to expand...
Don't imitate me

You can have Kabul if you want, CONGRATS ON HOSTING YOUR SECOND WINTER MEETINGS!

#20
Finding @Reel instead of @Wolfman21 is an amazing WBL plot twist.

Click to expand...
Too late, each post in this thread gives you one new WBL team to run

#24
Yankee151 said:
At work, @bruin @bruin228 please respond with the appropriate hills gif for me

Sent from my SM-G960U using Tapatalk
Click to expand...

Click to expand...
Only because you're already here. Pick a team and rebrand them, designer dude!

#26
Rad likes the gif because the mouth and text lineup

#27
I have begun intergalactic recruitment efforts. First up, the old Nats board where I plucked @TonyGin&Juice

#28
You guys should hit up your alternate internet friend sites and start recruiting.

#29
I had a fellow dota buddy who expressed mild interest back when we were full but he's got a jerb like me now since we're all going to make it brah, and thus doesn't have time for baseball games from the 2070s. Also he was used to weird budget rules, so prob not a fit

#30
Yes, it's impossible to function as an adult and play a lowkey simulation game.

We just finished a season, so it is good timing and we have a few teams to choose from.

A question for the rest of the league is moving to 19 or not. We can’t really afford to lose owners and I can give hayvis a key for 18 if we want to stay put.

#35
Can I be the Boston (UK) Brexits. It is a really shit town that had the highest Brexit vote in the UK.

#36
Boston is in America though

#37
Boston Brexits vs UK Kings rivalry is exactly what this league needs!

Utopia Moderator
#38
Our last Brit didn’t export once, so the bar is low

#39
Orlando said:
Our last Brit didn’t export once, so the bar is low
Click to expand...
We ceased to be an exporting nation in about 1935.

#40
Mr. Radpants said:
I love it when ULG casually drop in a conversation that they are employed
Click to expand...
Its not a real adult job, so I aint bragging about it

It's not like people export anyways
Click to expand...
I purchased 19 when it first came out anticipating a move, and I don’t play single player, so I’m in favor of moving to 19 as well. Also, welcome @hayvis!
Last edited: Nov 15, 2018

#46
Orlando said:
I’m not sure we should move for one season
Click to expand...
This isn't a good shtick

#47
I think us Os know about the inner rumblings of the league. Don Drain was the glue holding this league together and his passing has all the owners wanting to quit to go to the stars.

#48
I bought 19 anyway. Was going to take the hit. Am extremely glad that my incompetence has forced this move.

Utopia Moderator
#49
Mr. Radpants said:
This isn't a good shtick
Click to expand...
There are worse