Professional Rasslin' - It's reel to us

#1
Figured I'd save these from the old board

#2
I cringe every time I mistakenly try to recapture some part of my child hood by tuning into some pro wrestling. This shit is awful. Like I don't know if I would have gotten into this version of pro wrestling as a kid awful.

#4
I'm with Keith, I just watch youtubes of Last Call with Scott Hall and Jim Cornette rants when I need a fix

#5
@whiteyc_77 I followed Daniel Bryan when he was Bryan Danielson, tearing up the Indies. I watched at least 5 of his most classic Indy matches live. I'm a fan of his but in order to catch his segments or matches, along with this Wyatt/Shield feud I honestly had no idea about, I literally have to wade through a ton of shit. I need a Sportscenter side ticker shit with the show's agenda on the side so I know what's coming up

Mod Alumni
#6
Absolutely. I never watch WWE programming live, except for the PPV's. I always DVR it, and then watch it in about 30 minutes time, fast forwarding through all of the crap that nobody cares about.

#7
@whiteyc_77 I somehow never even considered this despite my already heavy dvr usage. I'm looking forward to the WWE Network. All that old stuff I enjoyed as a kid/teenager might get old or it might not even be anywhere near as enjoyable as it was but I'm willing to give it a try.

#8
Does WWE Network offer an unlimited library of ECW and WCW?

#11
Keith1212 said:
@GR8 2 B FL G8R Yes it does
Click to expand...
I don't think it does. Almost all the old PPVs (WWF, WCW and ECW) are going to be there, but you can't just randomly watch Nitro from January 4, 1998 because that stuff isn't there. There is going to be a regular schedule of shows (Legends House, Monday Night War, NXT, Superstars, whateverelsetheypulloutoftheirass) with set times, but no one is going to subscribe for that.

#12
As much as I might respect Jim Cornette, he wishes wrestling was completely stuck in the 1980s. One guy has the belt, another guy wants it, they fight.

#13
Larry Fitzgerald said:
As much as I might respect Jim Cornette, he wishes wrestling was completely stuck in the 1980s. One guy has the belt, another guy wants it, they fight.
Click to expand...
Jim Cornette? I know who he is but I'm basically wondering why you'd bring him up right now

#14
He's got a podcast/ is all over the podcast circuit

#15
I DVR'd TNA. The guide preview said that MVP was a new investor and tonight's episode would reveal his plans... that sounds like it might be interesting or it might be a disaster lol

#16
It's TNA. It's going to be a disaster. They could fuck up the return of Jesus Christ.

#17
Larry Fitzgerald said:
It's TNA. It's going to be a disaster. They could fuck up the return of Jesus Christ.
Click to expand...
Vince Russo is back. I think. That's the way Meltzer made it seem.

There have been times when TNA has had a solid product, but when it comes down to it, the same people that killed WCW killed TNA. I'm talking Bischoff, Hogan and Russo.

#18
Bought tickets to see Mick Foley's show in April. I am excite.

#21
Yeah, Hogan and Undertaker are both supposed to come back at the Feb. 24 Raw. #24
I can't even bring myself to watch this shit on DVR anymore. No Punk, the yo-yo that is Daniel Bryan's push, bland ass Randy Orton with all the screen time....ick.

#27
Vince McMahon is rumored to be buying Newcastle United 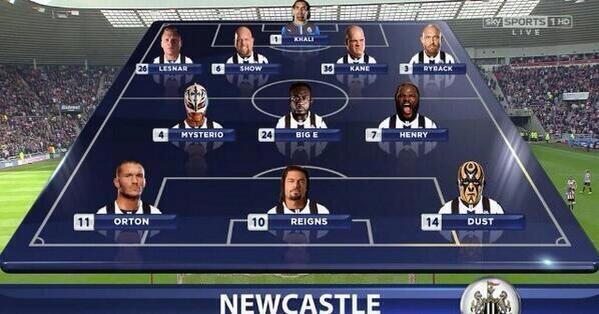 #28
goblue96 said:
Top two "trending now" terms on yahoo are CM Punk and Vince McMahon. What's going down?
Click to expand...
There were rumors that WWE released CM Punk from his contract. They didn't.

#31
Hulk Hogan officially back with the WWE and will be some sort of guest host at Wrestlemania. I guess we won't see him die in the ring after all.

#35
WWE Network is live. Just signed up for the free 7 day trial. Seems like they have some bandwidth issues, but better to get the kinks out now than say Wrestlemania.

#36
Chase said:
WWE Network is live. Just signed up for the free 7 day trial. Seems like they have some bandwidth issues, but better to get the kinks out now than say Wrestlemania.
Click to expand...
I signed up as well. They threw MLB Advanced Media under the bus in regards to launch issues, but I tend to think the blame is on WWE for waiting until the moment the network launches to let people sign up. MLB.TV has 4 Million + users, but they don't wait til opening day to let people sign up for the product.

#37
How is the Network working for yal l

This article got me semi erect

I'm an old school mark who was trading Super J Cup tapes and RF Video shoots in the fucking 90s. It seems it doesn't have any of that good shit, but in the example of shoots, you can't just break kayfabe on WWE's official network I guess.

#38
GR8 2 B FL G8R said:
How is the Network working for yal l
Click to expand...
To be honest, I haven't gotten a chance to watch a lot of stuff on it yet. I started watching a PPV yesterday (Beach Blast 92) but got distracted by trying to catch up on the DVR and then watching Raw. I did watch part of the post show and some stuff. It seemed fine, some buffering issues. For some reason I can't access the network using Chrome, so I had to use IE.

As far as shoot type stuff, they put that Shawn/Bret rivalry DVD up there (the documentary part), and I'm guessing they'll add stuff as time passes. There is a certain amount of older stuff (early Raws, ECW Hardcore TV, WWF shows at MSG), so I think there is a lot of potential. At 9.99 a month, well that's like one trip to Jamba Juice for me, so if I can watch a couple classic PPVs on a weekend I'll be happy.

The biggest issue to me will be if they can handle a million people streaming Wrestlemania at the same time, but then again MLB.TV has like 3 Million subscribers, and MLBAM did the backend of WatchESPN.

#39
I haven't really watched anything but I've read that the live streaming so far is great but watching older PPV's takes a few minutes and can be choppy. Once the 7 day trial is over I probably won't order it until the weekend of Wrestlemania.

#40
Network is buggy as he'll. WrestleMania is a month away, but I'm not sure how it doesn't end up a disaster. I'll probably just order it on traditional PPV and then be irate when the show sucks.

#41
I personally love the Network. It's buggy (as expected) but the fact that every PPV ever is on there, uncensored is a plus to me. The way I see it is basically for the cost of Battleground or some other throw-away PPV, you get every show throughout the year plus whatever you wanted to go back and watch.

#42
Larry Fitzgerald said:
I personally love the Network. It's buggy (as expected) but the fact that every PPV ever is on there, uncensored is a plus to me. The way I see it is basically for the cost of Battleground or some other throw-away PPV, you get every show throughout the year plus whatever you wanted to go back and watch.
Click to expand...
Well 6 months, but yeah. I'm going to keep the network because I spent $550 on PPVs last year, so $120 is a steal, I just want a fallback plan.

#45
CM Punk coming back tonight? Yes, according to Meltzer on his internet audio show yesterday.

#46
That's the rumor. If so, I predict a Orton/Batista/Bryan/Punk Fatal Four Way for the title at WrestleMania.

#48
This Chicago crowd is unbelievable.

#49
Chicago's always been Smark City, USA. Take away their native son and they go rabid.