I’ve received news of a major scandal being exposed among some “big hitters” in college football. The first of twelve schools to be exposed: Notre Dame. Others so far include Nebraska and Iowa. More to be announced as information comes forward.

From the Lincoln Journal: Cornhuskers Shucked

And the Iowa City Register: Hock-In-Your-Eye

FYI this is purely satirical. This is an NCAA 14 dynasty. Death penalty style meaning all fictitious players will have their ratings adjusted to below 56. AKA Trinity Bible if you remember that epic storyline.

Whether this gets off the ground time will tell. Adjusting rosters for this takes a LOT of time...

All of the indicted schools will be placed in the Big 10. Recruiting wise CPU will be able to recruit as normal. I’ll take the reins at Notre Dame, and will have additional restrictions: for the first 3 years, max of 3 star level of recruit, and a one state border. Three year bowl ban as well.

See You Next Wednesday

More schools indicted in the scandal:

Oklahoma: Drop the “Boomer” on the Sooners (Norman Non-Pareil)

Colorado: In the Buff-Oh No (Denver Times)

The allegations continue to hit for three more schools:

The final three schools have been exposed:

See You Next Wednesday 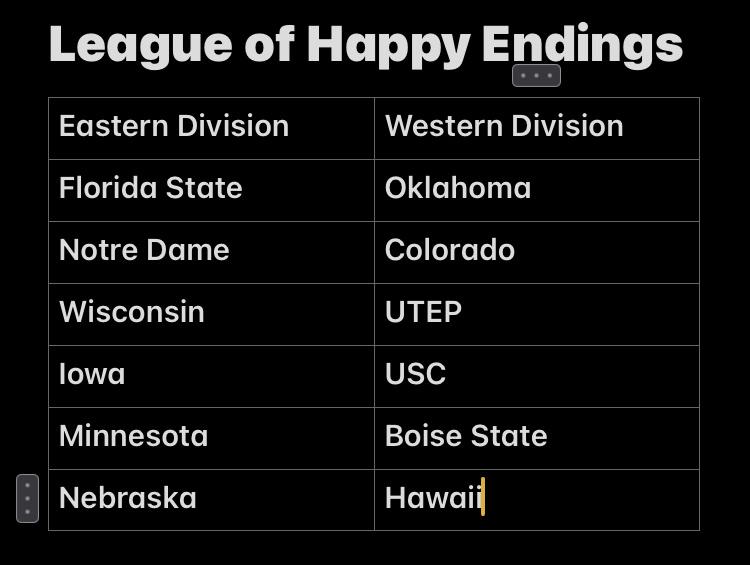 Update on the guidelines to make this work:
Pray for the safety of this disaster of a dynasty.

Boy are my hands going to be full with this dynasty. A few more details:
This is going to be rat rage weekly fist fucking week after week. I will be lucky to win one game this coming season.

NCAA Moderator
You are definitely getting fired, so I would turn off firings if you can

Was It Really Worth It?

Now that the NCAA has brought down the hammer on Notre Dame for their “promiscuous “ scandal - one has to wonder, was it really with the happy ending?

The happy ending 67 Notre Dame football players received from the Kraft Foundation - which we really found out was an adult act circle jerk.

For 18 to 22 year old college boys, sure. It feeds the humanistic craving of lust and luxury. But it sure didn’t feed into winning a national championship.

And Mathias Krauschek is the fall guy in this whole ordeal. Assigned by the board of control to clean up the mess previous management left.

Gone are the 14 seniors, 8 of which left for the NFL Draft. Six more transferred but face a one year suspension by the NCAA for what’s called a “show clause”. Then the remaining 67 players were immediately expelled from the university.

Not to mention the entire coaching staff was sent packing with their own “show clause” and a two year suspension from any coaching assignments.

What a mess Krauschek has inherited.

Add in the brutal schedule ND plays, and the conference it’s in (The USFC - really known as the League of Happy Endings). And the 54 walk-ons that make up the roster for this season - let’s just say it will take nothing short of answered prayers to win. One. Game.

The leash Krauschek should have to clean this mess up has to be long long long. However, it wont equate to the immediate expectation to win. Not fair, true - but life isn’t fair.

But, despite the score, Irish coach Mathias Krauschek was upbeat and positive.

“Sure, the result on the scoreboard didn’t look like a competitive game. But actually we played pretty darn well,” Krauschek said, “when a team loses a strong nucleus like we did, and replace it with less talented individuals - you’re going to get thumped.”

A couple things did stand out for Krauschek in the game:
But the Irish were handicapped with a constant Sooner pass rush. It led to Irish quarterback Blake Johnson being sacked 14 times.

Krauschek also mentioned the lack of two-back sets. “That’s purely a coaching error on me,” Krauschek said, “you can be sure we’ll have more two back to help our running backs run the ball better.”

The Irish host Weber State in the home opener next Saturday. 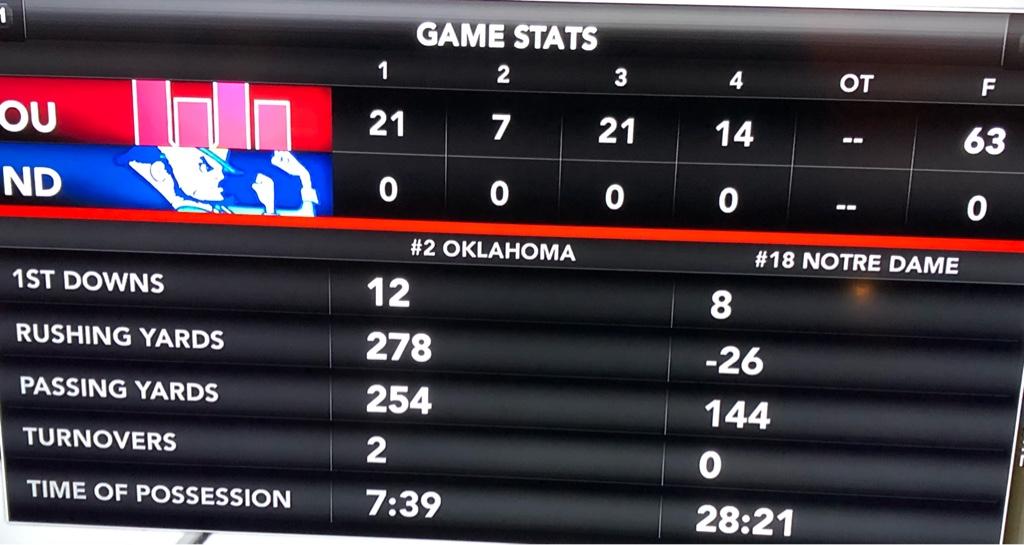 Weber State rushed for 287 yards and 5 touchdowns as a team to defeat Notre Dame 45-10 in Notre Dame Stadium.

While the Irish wasn’t hampered by an elite pass rush, it hamstrung itself enough by turning the ball over twice, the first of was returned 87 yards for a touchdown.

“The first turnover (Johnson fumble) in the red zone was an absolute killer,” said Irish head coach Mathias Krauschek, “if we score at least 3 there, our mental psyches probably are different - which leads this game to being different as well.”

The offense again struggled to maintain a consistent attack, gaining just 167 net yards. More importantly, for the second straight week, not mustering an offensive touchdown. QB Blake Johnson threw for 145 yards, but needed 42 attempts to do it. Furthermore, he only completed 12 of the 42 attempts.

The Irish’s points came on a 64 yard interception return by CB Ronnie Bass and a 29 yard field goal by K Johnny Dohrer.

After two weeks, Krauschek still remains upbeat despite the two losses. “The boys are playing hard, no question,” Krauschek said, “but sometimes you need to realize that talent is needed to be successful. I am confident that our coaching approach is the right one. We just need to find the athleticism to match it.”

QB Carlos Montez rushed for 116 yards and threw for 187 more to lead the UTEP Miners to a 38-7 win over Notre Dame Saturday afternoon.

UTEP ran for 323 yards as a team. RB Herbert Cortez added 88 yards and a two touchdowns.

Even though the score indicated another loss, they may have found something in backup QB J.P. Richardson. Richardson, called off the bench for starter Blake Johnson, caught the hot hand and threw for 144 yards.

His 7-yard TD pass to TE Josiah Horne in the second quarter gave the Irish hope and momentum in what was a tight game.

“J.P. stepped in nicely and played pretty well in a tough situation,” Irish coach Mathias Krauschek said, “he engineered several good drives throughout the game. We just didn’t capitalize in the red zone.”

LB Luke Norman also continued his solid play. His seven tackles was a season high for the team. And DE Myles Stevens played his best game yet - 6 tackles and 3 sacks. “But we need more performances from others from here on out to have chances in games,” Krauschek said, “our schedule has no breaks from here on out.

The Irish host Colorado in the Sal Aunese game, then a brutal stretch with Iowa, at Nebraska and Stanford the next three games.

A stiff, cold rain fell on Irish Head Coach Mathias Krauschek. “That was about as bad a game we could have played. And when your hamstrung talent wise - well we got our asses handed to us.”

Colorado stormed out to a 21-0 lead three minutes into the game, and 38-0 at half. Then they put the Buffalo machine into first gear cruise control.

“We were awful in all phases. We couldn’t throw the ball. We couldn’t catch the ball. Defensively we didn’t tackle. The rain really dampened any want to even play today. It was an elementary school game on the playground. And Colorado had all the athletes.”

The Iowa Hawkeyes used a punishing ground game and chewed up a season high 487 yards and 622 total yards en route to a 65-7 win over Notre Dame.

Weird thing though - it was only a 21-7 halftime lead.

“After last week’s disaster against Colorado, our motive this week in practice was just better effort,” said Irish head coach Mathias Krauschek, “and for two and a half quarters, we had it. Blake led a real super drive to keep the game in reach at 14-7. We were on the verge of tying the game up. But the fumble return for a touchdown was a killer.”

“We aren’t mentally ready to handle bounce back and adversity like that yet.”

Krauschek was in reference to a six minute point in the second quarter. QB Blake Johnson threw a 15-yard touchdown pass to WR Charles Robbins. After forcing a Hawkeye three and out on its next possession, Johnson led the Irish into the red zone. On a third and six, DT Davion Nixon blasted Johnson from the blindside, and forced a fumble. He then scooped it up and rumbled 84 yards for a touchdown.

After that, it was all Hawks. RB Mehki Sargent rushed for 187 yards. WR Irhim Marsette caught six passes for 133 yards.

And left the Irish in a wake of a destructed group.

Cardinal Bury the Irish
Krauschek on Hot Cross After 66-7 Defeat.

Sure, Stanford was ranked #5 in the country. But Notre Dame Head Coach Mathias Krauschek had some glimmer of hope coming into the game.

“We’ve put together a solid few weeks of practice,” Krauschek said leading into the matchup against Stanford.

But the Cardinal flexed is academic and athletic muscle, destroying the Irish 66-7, leaving to wonder among the Irish nation whether Krauschek was the right guy to lead.

“These weekly losses, whether they’re by one or 51, suck,” said Krauschek.

One has to wonder how many more of these Krauschek can take before resigning.

A 42-12 defeat by the hands of the Nebraska Cornhuskers was the final straw to the brief tenure of embattled coach Mathias Krauschek. The Notre Dame Board of Directors fired Krauschek via a Zoom conference call, citing “we have seen enough of this gross ineptitude. It is time to move in a different direction.”

Krauschek was defiant yet cordial in his dismissal message. “Those young men fought for me every week. I can’t help those men were placed in an absolute no win situation. The incompetence of the previous coaching staff in their wild hair up their asses have created a permanent stain on this prestigious university.”

Krauschek continued, “that [bleeping] Board of Directors doesn’t know a hole from their ass. That group played their best game, and I’m the scapegoat for everything else. They led a major Power 5 school for almost an entire half. That has to count for something!” Krauschek then slammed his fist in a rage and stormed off the press conference.

Game wise, Notre Dame grinded up a season high 342 yards, 302 of it passing from QB Blake Johnson. It held a 3-0 lead until late in the second quarter when Nebraska QB Adrian Martinez hit a streaking JD Spielman for a 65-yard touchdown pass.