My first save on Football Manager 20. However, I've got a men's competitive league curling game tonight. So, a deep dive into the club will have to wait, most likely, until tomorrow. 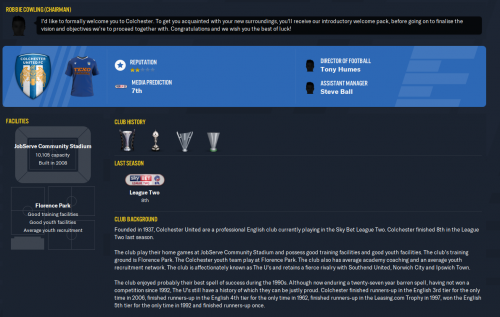 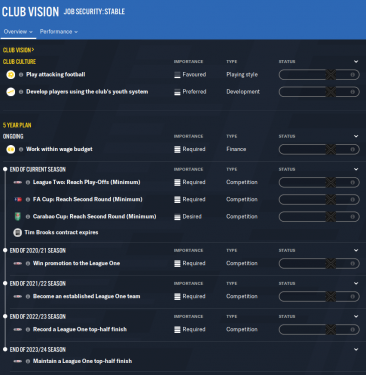 The board has an ambitious five-year plan.

I finished a bunch of training for work this morning. Rest of the day is devoted to this save.

We started off the season very slowly. The 5-1-2-2 WB formation, which worked so well in the friendlies, was getting picked apart in the regular season. Plus, it was keeping some of our better talent off the field. We have a lot of strong wing forwards on the team. I switched it up to a 4-3-3 and the results started flowing. We went undefeated in September with the only blip coming in a 2-2 tie against Swindon. In August, we were in dead last. By the end of the September, we have almost come full circle. We sit in 4th place just outside the automatic promotion places and firmly in the playoffs. I'll be sticking with the 4-3-3 as our base formation for the season. 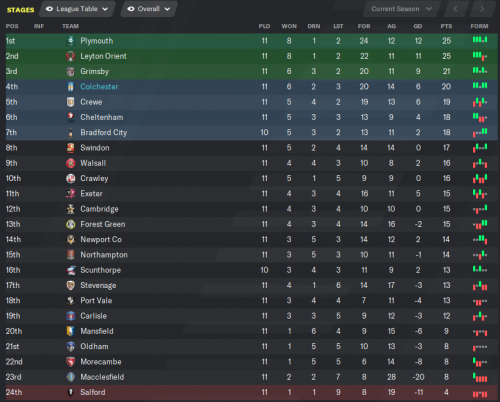 Plymouth, Leyton Orient and Grimsby are trying to separate themselves from the pack. We lead a second tier of teams that are in the playoff hunt but with a good streak of games can push for the top three. Salford is really struggling with only one win and one draw in their first 11 matches.

Ben Stevenson has been the best player in the first two months of the season. Leads the midfield with five goals including four goals in a three-game stretch. He only has one assist in an advanced playmaker role but his five goals more than makeup for it at the moment. Loanee Ryan Edmundson is tied with Stevenson on five goals. He plays at the top of the attacking three in a target man role. Hopefully, his form continues for the rest of the season. Right back Ryan Jackson leads the team with four assists. 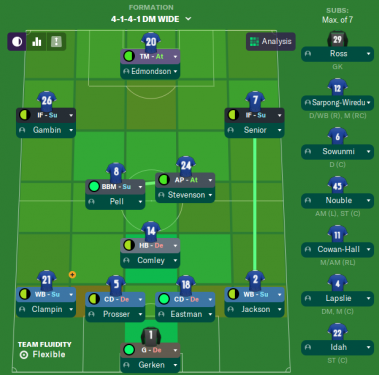 In possession, the formation acts as a 3-5-2 with an over load on the wings. The wing backs come up and support the central midfield. The half back stays deep and acts as a shield for the center back. The half back also allows the two central midfielders to push forward as well. Stevenson pushes into the attacking midfield while the two wing forwards sit inside and allow space for the wing backs to put the feet on the sidelines to stretch the field horizontally. The target man has a dual role. The first one is obvious...score goals. His second role is to act as dummy for crosses and occupy bodies while the wing forwards have either a 1v1 or an open goal to shoot at.

The switch to the 4-1-4-1 DM wide or what I'm calling the 4-3-3 has really kicked our season into high gear. Two months and only one loss and that loss came in a meaning lending.com/Checkatrade Trophy game where both ourselves and Ipswich were already through into the second round. In league play, we drew against Newport County and Cheltenham but other than we won everything. Won in both the 1st and 2nd round of the FA Cup so we move on to the 3rd round where our opponent is still TBA. 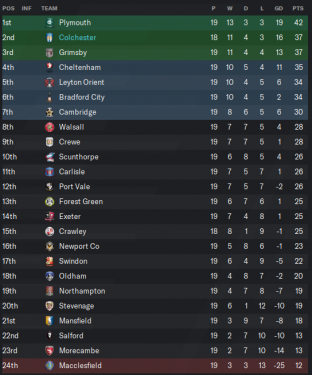 We have a game-in-hand over the rest of the league since we have a couple of players who get international call-ups to small countries (looking at you, Malta). Our excellent form has seen us move into second place behind Plymouth, we lost to 4-2 in the second game of the season when I still figuring out what I have with this team. We are currently nine points ahead of 8th place and one point ahead of 4th place. Salford fired their manager and brought in Ian Holloway as a replacement. Holloway has moved them out of the basement and into 22nd place but they are still in a relegation battle with Morecambe and Macclesfield.

Ryan Edmundson has been a League Two goal scoring machine. He's got 12 goals in all competitions. He gets a rest in the cup games and I bring in Adam Idah who has four goals of his own. Ben Stevenson hasn't scored any goals in the last two months so his total remains at five but he has added three assists to bring his total to four. Harry Pall has been a workhouse in the midfield as well. Pall has matched Stevenson's five goals and four assists. Nice to have a combined 10 goals and eight assists from your midfield by December 1st. RB Ryan Jackson is our fourth player with an average rating above seven. He has a team-high six assists from this right back position.

Two months go by and we still having dropped a league game. Our only losses were to League One Bristol Rovers in the lending.com cup on penalties and the League Two Chesterfield in the 3rd round of the FA Cup. The Bristol loss didn't bother me but the Chesterfield loss did solely from a monetary perspective. Lost out on the 3rd round prize fund and the potential of a 4th round road game against a big opponent. Oh well. 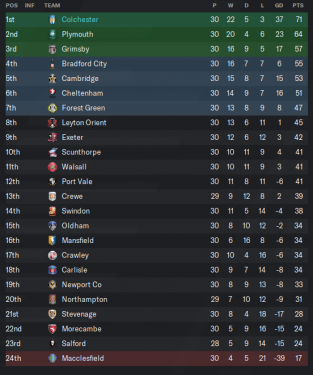 Going so long without a loss and pushed us into a very solid first place. We've got a seven point lead on 2nd place on Plymouth, a 16-point lead over 4th place Bradford City and a 26-point lead over 8th place Leyton Orient. A playoff spot is all but guaranteed at the point and a promotion is very likely. The only thing which is a coin flip is will Colchester win the title.

Center forward Ryan Edmondson has been a goal-scoring machine for us this season. He leads League Two in scoring and has 22 goals in all competitions. In the midfield, Ben Stevenson continues to be the engine which drives us forward with eight goals and six assists. We've had some rest/injury problems in the midfield which caused me to call up Noah Chilvers from the U23 team and he fit right in. Playing primarily in the advanced playmaker position, he has two goals in six appearances. Right back Ryan Jackson has slipped a little bit over these two months but his slack offensively has been picked up by right forward Courtney Senior. Senior had a strong two months. He is now second on the team with nine goals and second with five assists (though we do have three players who have six assists).

Not to hijack, but I took over Chester, and immediately won promotion to the National League after my first season, and through 20 games I was in first in the National League, now I'm sitting in 3rd, 1 point off of second place, and 2 points off of first after a couple draws.
You must log in or register to reply here.
Share:
Facebook Twitter Reddit Pinterest Tumblr WhatsApp Email Link
Top